Traditional LCD-based Passenger Information systems have based on a coach PID server PC with LCD displays attached to it using VGA or HDMI cables, repeaters or media converters. This architecture is not optimal and has several challenges and limitations. The DURAGON PID-R Series intelligent railway PIS Displays enable the creation of an in-coach distributed intelligent HD resolution system, which does not require a Host for media delivery. Display information is not sent throughout the vehicle, rather each PID-display manages its own content delivery based on control information received from the train backbone Ethernet.

The figure below illustrates an Ethernet-based system solution with both PID and DRMD connected the DCORE-DR01-R router using a single Ethernet port with daisy chain downstream Ethernet for other devices. The Quasar Gatway can interface to the train MVB to extract operation controlling data. 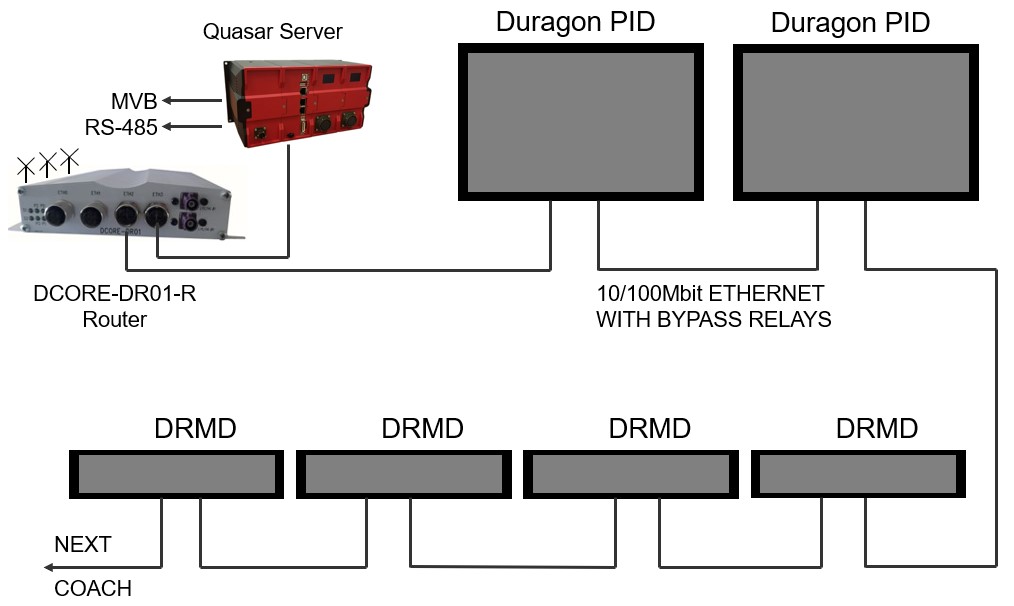 A power-efficient 6-core RK3399 ARM SoC with advanced LINUX firmware controls the operation of the PIDE-R and the delivery of combined rich media content including animations, effects, static images as well as HD-video combined with train operational data. Media is stored in each device individually and can be updated over Ethernet. The software is LINUX based, empowering integrators to use QT for graphical design and compile their QT-application to work on the PID-R series displays. Such development toolchains and open SW platform accelerates project completion and enables system integrators to independently maintain their applications.

The Duragon PIDE-R series displays connect directly to the train's 110VDC power feeder. A proprietary multi-stage active protection and filtering circuitry is designed to exceed the requirements of EMC and immunity standards of EN50155 and EN50121.

Duragon Systems can provide customization services, which can include engineering, production and certification. Available are various LCD sizes, mechanical solutions, as well as project specific functionalities or SW interfaces to other onboard systems.